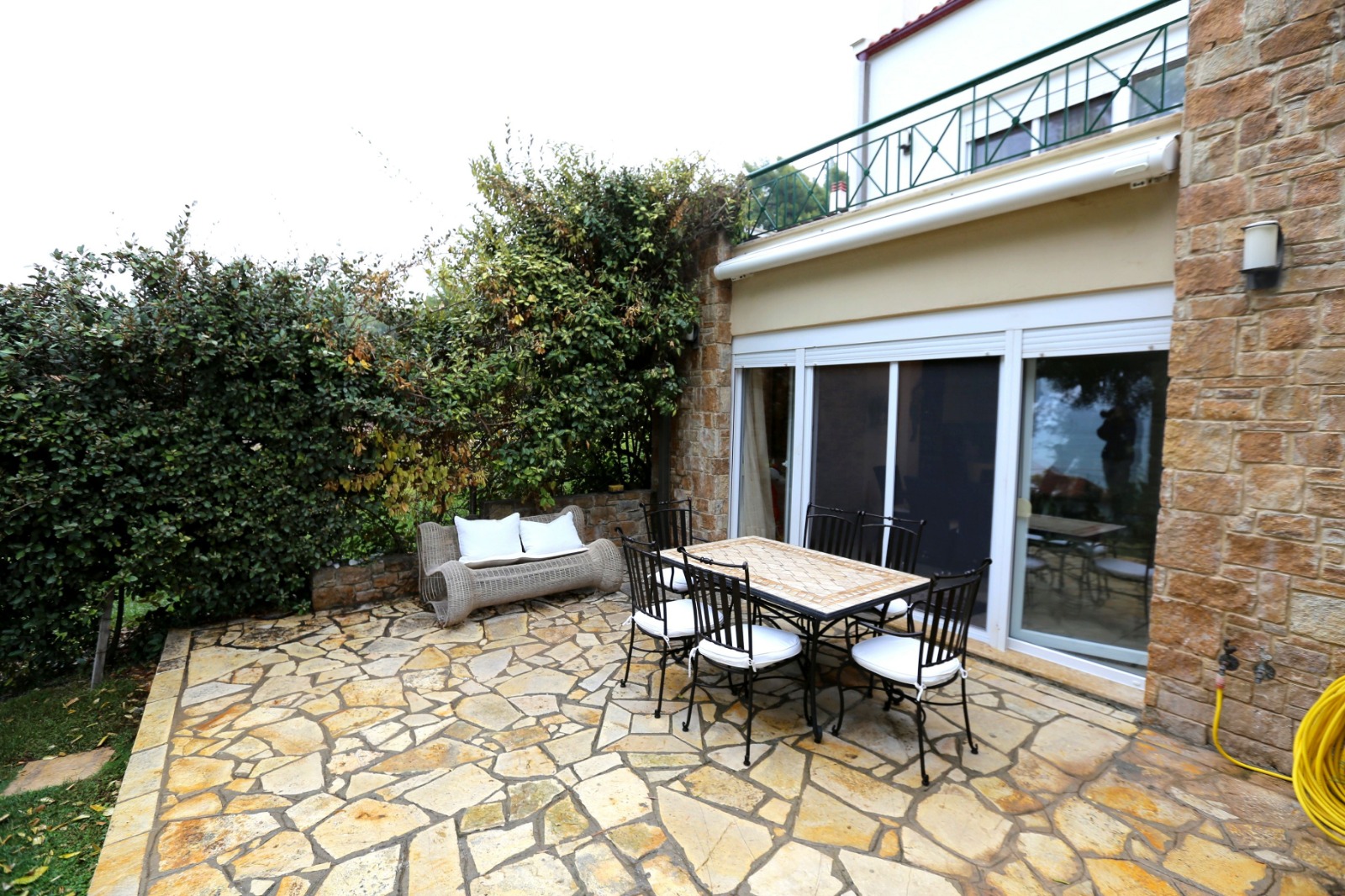 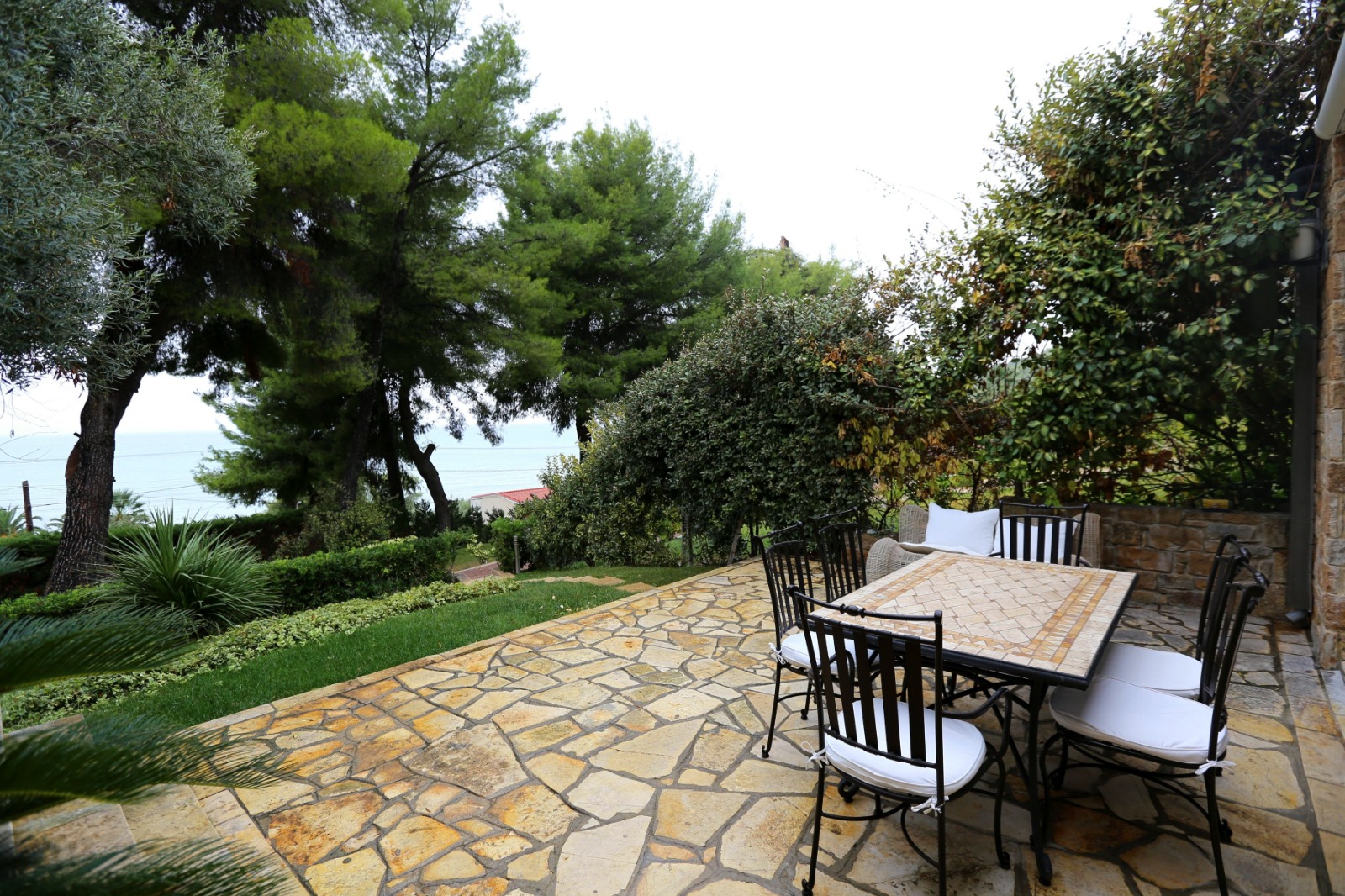 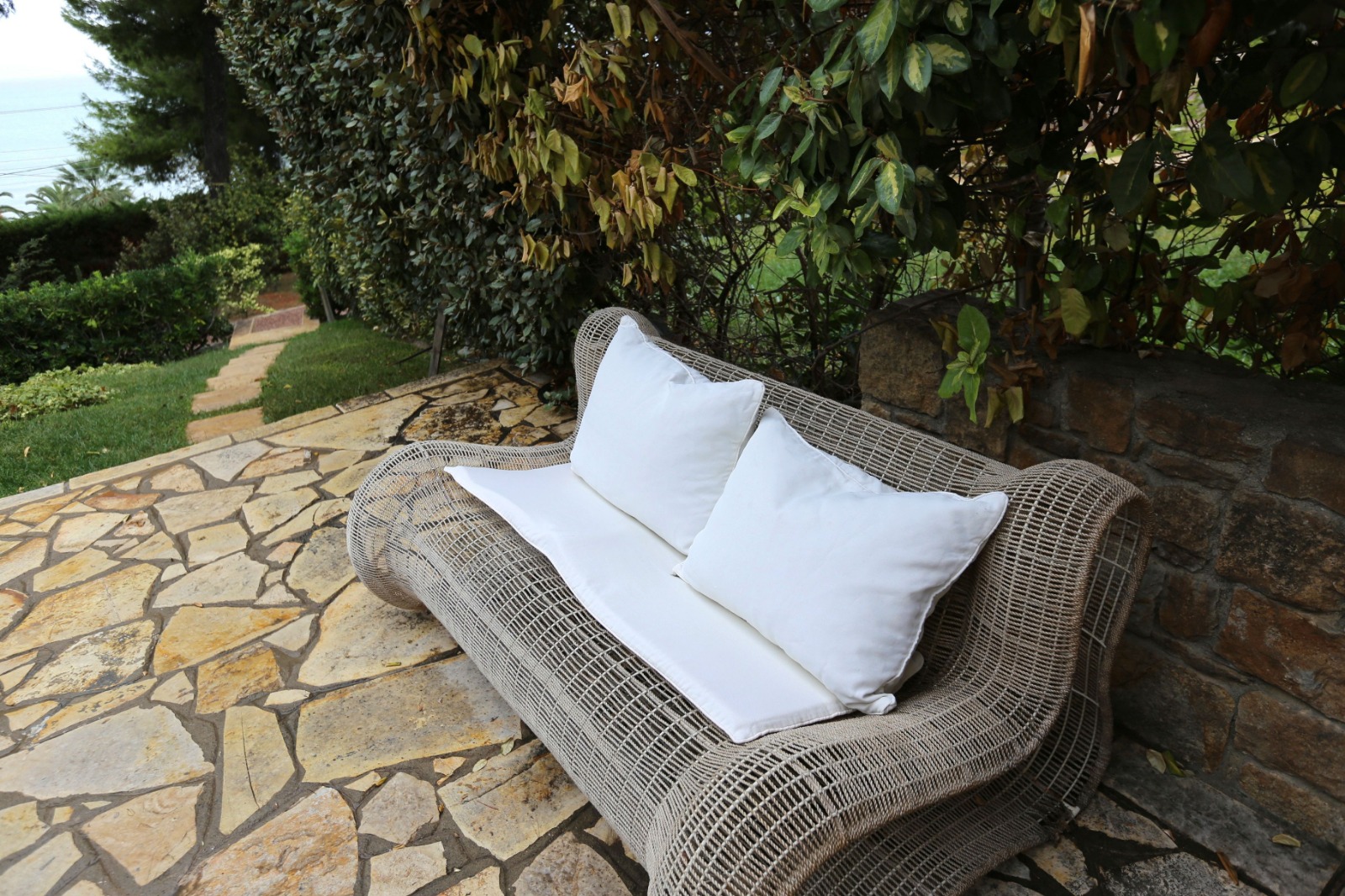 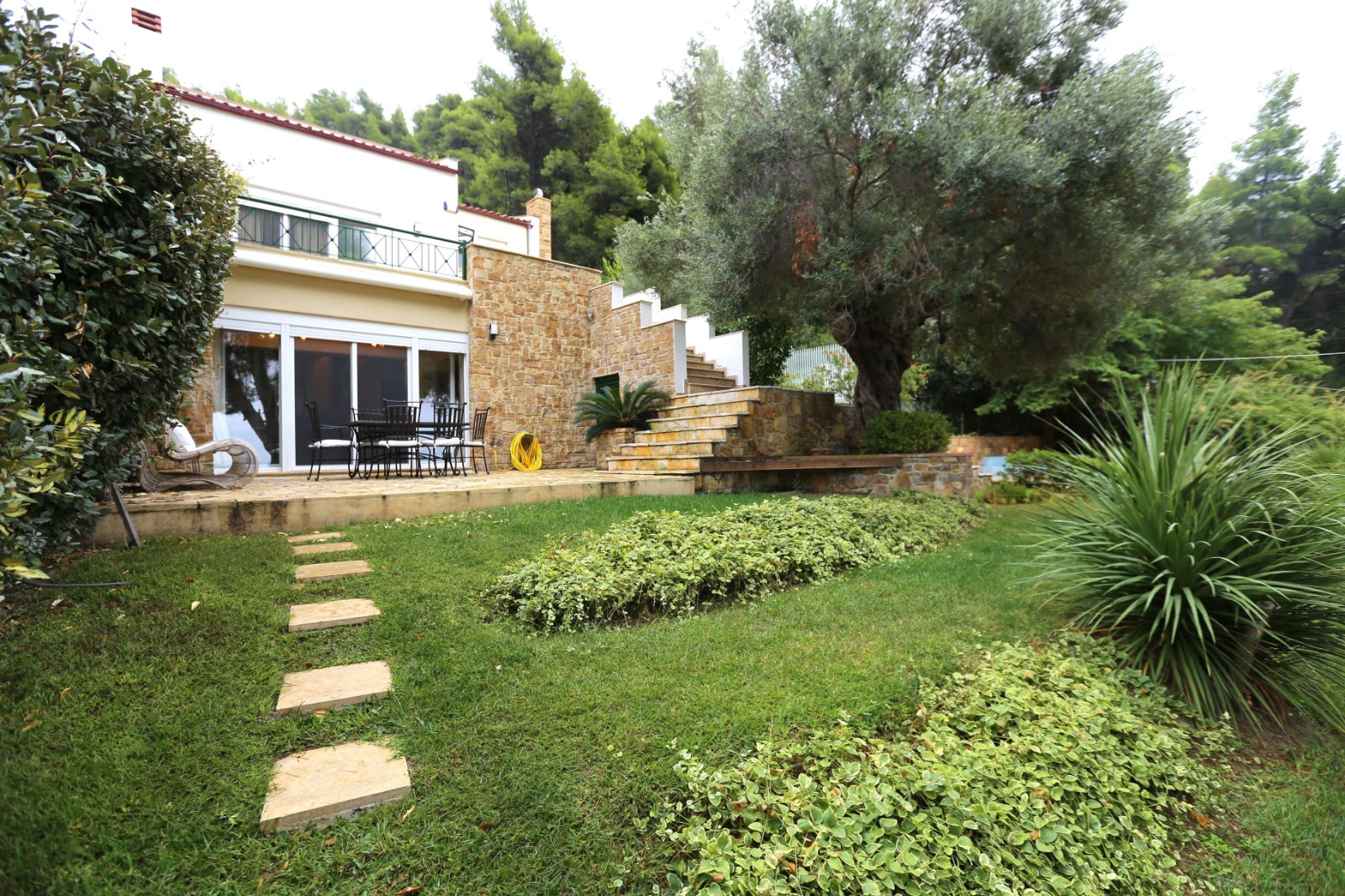 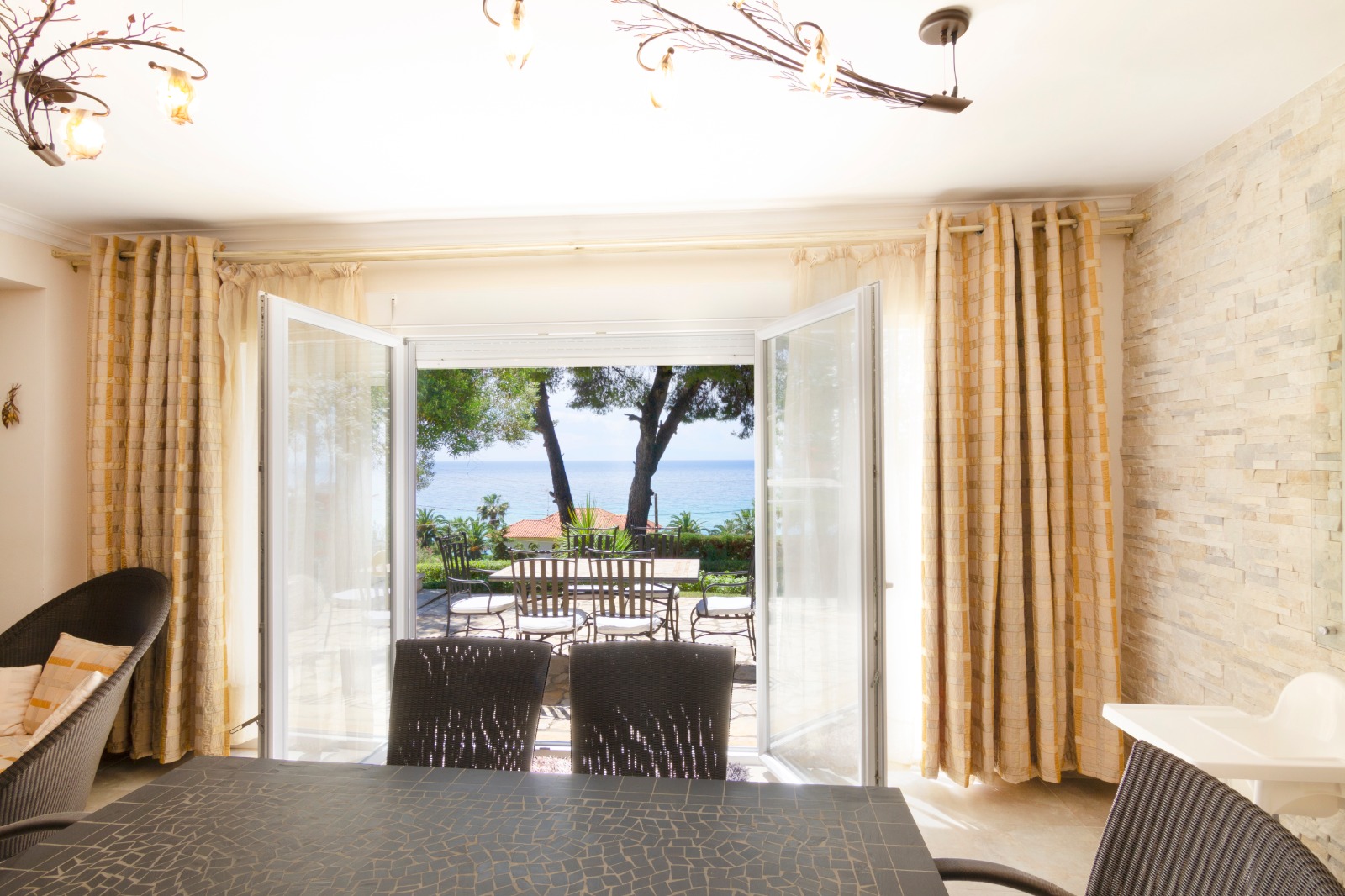 Magnificent 4 bedroom villa with a private garden surrounded by greenery is located on the peninsula of Kassandra, Chalkidiki. Villa 70 m from the sandy beach, with beautiful views of the mountains and the sea, where in the evening you can enjoy the sunset sitting on the veranda. The house can accommodate up to 9 guests. The house is located in a complex but the villa is completely private with its own territory. The house is built in the form of a cascade from the inside, at the entrance to the house there is a small hall and the master bedroom with a double bed and built-in wardrobe also has a balcony with stunning sea views. A little higher there is another bedroom with a double bed, a lounge with a sofa bed and a bathroom with a bathtub. Down a few steps is another bedroom with a double bed overlooking the garden, as well as another bathroom with a hydromassage shower. Then a little lower there is another bedroom with a double bed and an upper window. On the lower level there is a large living room with a fireplace and a kitchen. There is also access to the main terrace, where there is an outdoor dining area. The villa is equipped with everything you need, high-quality furniture and accessories brought from different parts of the world, air conditioners, electrical appliances, internet, towels, bathrobes, DVD player, satellite TV, first aid kit, toys for children and board games. There is a separate barbecue area on the street, a garden near the house where there are many flowers, a well-groomed lawn, an outdoor shower, parking, the entrance to the complex has automatic gates that can be closed, where children can play on the terrace in complete safety. To the beach 70 m there is a small descent down the stairs, on the beach there is an equipped beach bar. The nearest village where there are many super markets, shops, taverns is 2 km away.

Halkidiki is the center of modern international beach tourism, people from all over the world spend their holidays here every year. The azure of the Aegean Sea has rightfully received the Blue Flag award. Historical monuments, picturesque landscape, resorts with a developed modern infrastructure - all this is concentrated on the Kassandra peninsula. The peninsula of Kassandra is the "pearl" of Halkidiki. It got its name in memory of King Kassandra, the strategist of Alexander the Great, in ancient times it was called Palini or the “finger” of Halkidiki, in antiquity the peninsula was called Flegra, which means “burning place”. According to ancient Greek mythology, once the island was inhabited by titans who wished to take away power over the world from Zeus, they started a war with the gods, for which they paid dearly. The peninsula is located between the two channels Toroneos and Thermaikos. It is connected to the mainland by the Potidia Canal. The length of the beaches is about 50 km. The beach area is indented with cozy and romantic bays and has a well-groomed and picturesque view.

Check in: 14:00 / Check out: 12:00
30% prepayment to the owner's account, the remaining 70% upon arrival in cash deposit 1000 euros
Suitability
Pets: No
Smoke: No smoking
Children: Yes, great for kids
Long term rentals: No
Elderly or infirm: Not suitable
Wheelchair: No

Write a review
Listing not yet reviewed by any guest. You can be the first one to write a review.

Send to a friend